William Marvin Morse was born October 27, 1951 at Saint Francis Hospital in Maryville, Missouri. He was welcomed into this world by his parents, Everett Leroy Morse and Opal Adell (Jones) Morse and one older brother Franklin Leroy Morse. He was born with a few health issues/special needs. Marvin never acted like he was different or disabled in any way.

In 1970 he moved to Redding, which he considered his hometown. He loved Redding community and never forgot anyone he met along the way.

He worked at Innovated Industries in Mount Ayr and Creston locations, making many friends over the years. However, a lot of people remember his work at Hardee's in Creston. He kept the tables clean while meeting and greeting everyone with a smile and conversation. Creston was yet another chapter in his life where he lived and worked.

After losing his eyesight in 2000, he moved back to his hometown of Redding. His health declined and he went to live at Mount Ayr Health Care Center,in 2002. He continued to touch peoples lives and was given tender loving care by many.

Marvin left a memory in many lives here on earth & now has left us to live in his forever home of Heaven. He will be greatly missed.

A memorial fund has been established in his name to be used for the Frontier Hall in Redding.

To plant memorial trees or send flowers to the family in memory of William Morse, please visit our flower store.

Many condolences to those afflicted by the loss if Marvin. He was beautiful on the inside and out and his smile was a testimony to his pure heart and not having to see to know the good in others. May he now be at peace in the promised land.

Rest in Peace Marvin. You fought the good fight. Go rest high on that mountain.

we all share in life trying to grow up and Marvin was a smile and a friendly attitude in any crowd. Somehow, he was just a kind soul without too many words but that was Okay! We are sorry to say good bye but you have a better place to go now and we are happy for you, God being your Friend, in Christ our Saviour. Go and Rest and we will follow when our time comes... Amen!

Where there is sadness, love plants a garden of memories. Wishing you moments of peace and tender reflection...
sending you heartfelt sympathy

So sorry to hear of your loss of Marvin. I''ll always remember riding the school bus together. He was always so shy. He was a great guy & a special friend. I know he will be missed so much. Sending my deepest sympathy to the family. Love & hugs to all of you. May God comfort your hearts.

My most sincere condolences to Marv''s family. 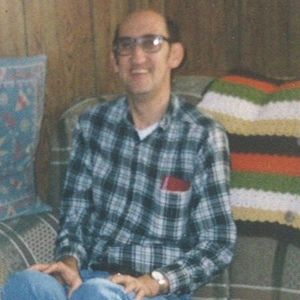