Rhoda Lois Baker Johnston was born December 27, 1919, near Blunt, South Dakota, one of seven children of Edward and Lena Baker. In 1920 the family moved to the Clearfield area to reside again on the Baker farm. Rhoda graduated from Clearfield High School in 1938, and began in-home care for Estes Johnston in Veril Johnston's home. Thus began the courtship of Vern and Rhoda Johnston. On March 8, 1940, they were united in marriage. They lived near Conway on a farm before settling in Lincoln township in northwest Ringgold County in 1945. Three children blessed this union: Ellen, Edward and Mary. Vern and Rhoda celebrated nearly 55 years of marriage prior to his death in November, 1994. On December 2, 2015, Rhoda entered eternal rest at Courtyard Estates in Des Moines, Iowa.

Rhoda worked alongside Vern on the farm, helping as needed, and also gardening, canning, sewing, mending, and mowing the yard. When time allowed, she and family members enjoyed traveling to visit relatives and friends. Rhoda remembered these trips with photographs and numerous scrapbooks. Nearly every season on the farm and trip away from the farm were lovingly recorded by her hand. She liked receiving and sending the latest news by keeping a family chain letter going for many years. Rhoda cared for family members in their home including her mother, father-in-law, and two of her sisters.

Rhoda's faith was important in everything she did. She quietly and devotedly strived to include God in all activities. She and Vern were members of the First Baptist Church in Creston. In later years she also enjoyed the fellowship of Retha Herrold and Opal Goodale and attended the local quilting group at the United Church of Diagonal. She was a board member of the Diagonal Printing Museum and Genealogical Center, and researched her own family histories for later generations to enjoy. She was a Jolly Jinglers 4-H club leader for several years.

Cinnamon rolls were a specialty of Rhoda's as well as her homemade bread. No meal was complete without her rolls, bread or doughnuts. Rhoda baked bread at the Shamrock Café in Mount Ayr for several years. Rhoda cherished babies; she especially enjoyed helping in the church's nursery on Sunday mornings. Spoiling her own children and grandchildren became a natural thing. Birthday cakes were always baked and decorated, then often served with homemade ice cream on these special occasions.

A memorial fund has been established to the Diagonal Museum.

To plant memorial trees or send flowers to the family in memory of Rhoda Johnston, please visit our flower store.

The Kelley''s light a candle in memory of Great Aunt Rhoda...

I always remember Rhoda''s around at all of our family events. I never understood the significance of her cakes, but now reading through her obituary I do. I wish I would have been a little closer& a little older to learn more about her and that side of the family. I am forever grateful to have had a great aunt with whom I share a birthday with. Thank you a million times over for all the love and may you rest in eternal peace sweet lady.

Leave a condolence or a memory.

I wish we could be with you sharing in your memories and tributes to this
incredible woman I have been blessed to call "my cousin." How precious is the promise that we do not have to grieve as those do who have no hope. Cousin Rhoda lived her life so that we could see her good works which glorified her Father in heaven. I will miss her cheerful smile and practical ways. May God bless you all as you grieve and are comforted. (Please read the email I sent Mary on Friday.) Love you!

Our condolences on the loss of Rhoda. She was a wonderful mother, grandmother, and neighbor. She has left a legacy to follow and treasure for all those whose life she touched. 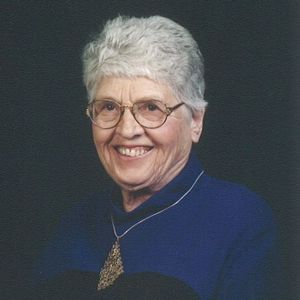