Quentin V. Anderson was born May 7, 1932, to George and Lena (Richardson) Anderson. Quentin grew up on the family farm east of Ellston with his younger brother Carnie.  Led by their father’s example, they learned to work hard and invest in their community by working their farm, running the Anderson Saw Mill and the Ellston Grain Elevator.  At the age of 16 he purchased his first dozer.  Quentin graduated from Ellston Community School in 1949, attended American Institute of Business, and served in the U.S. Army.  He was united in marriage to Rita (Hewlett) of Grand River on October 20, 1957.  They owned and operated the farm and several businesses including dirt construction, building construction, a farm equipment dealership, and a bowling alley.

Quentin was elected to the Iowa Legislature in 1963 as a Democrat in a predominately Republican County.  He was one of its youngest members at age 29.  He served in the legislature from 1963 to 1967.  He then ran for the Iowa Senate on the Republican ticket and served 4 years, 1969-1973, before being elected back to the Iowa legislature for 2 more years, 1973-75.  At a time when the urban areas took over control of the state government, he was a strong voice to protect rural areas.  His work on legislation to change the inheritance tax, personal property tax, and tax on livestock had a major impact in southwest Iowa and across the state.  As a freshman legislator he authored the Iowa branding laws.  Quentin believed in less government control and more individual opportunity.

During his time in the Iowa state house, Rita and Quentin had two children, Clinton and Cherri.  It was also during this time that they started on a project Quentin and his father had envisioned before George’s passing – building Sun Valley Lake.  The spring-fed valley east of Ellston had a sandy bottom with a grassland watershed that would be a good setting for a clean body of water.  Land was purchased from ten neighbors making a total of 1,300 acres including the Anderson Family Farm.  The first clearing and dirt work on the lake began in 1969 and the dam was closed in 1972.  The 500 acre lake filled quicker than expected and it was full within a year. Quentin worked tirelessly researching, designing, and building the lake;  the first to implement silt ponds to keep the lake water clean, a practice that is commonly used today;  designing and building the roads, the dam, golf course, marina, clubhouse, restaurant, and several houses on the lake; putting in utilities including a central water system that served area farms and the town of Kellerton.  He did all of this with local labor, financed through the Tingley Bank.  In the early development stages, Quentin turned down offers to purchase the project to keep it local and benefit the community.

Forty-five years later, there are over 600 homes around the lake that provide Ringgold County with property tax and sales tax dollars as well as creating jobs in the area. Quentin’s vision has made a tremendous impact on the local and county economy by improving the quality of life, increasing beauty, and providing recreation.  Quentin loved his family, community and country.

Quentin passed away on December 27, 2019. Preceding him in death are his parents George and Lena, wife Rita, and brother Carnie.

Left to carry on his legacy are his children and grandchildren:  Clint (Paula) Anderson and Grant; Cherri (Jeff) Vos, Quency and Chania; sister-in-law Joyce Anderson; nieces, nephews and friends will cherish his memory.

Memorials may be given in Quentin’s name to the Ellston American Legion or the Ellston United Methodist Church.

To plant memorial trees or send flowers to the family in memory of Quentin Anderson, please visit our flower store.

I have known Quentin since he and I attended Ellston High School together. He will be greatly missed by all who knew him. Lloyd Jonez

My heart goes out to Clint, Cheri, and all the family on the loss of such a great man!! I grew up knowing Quentin and Rita. Helped by baby sitting for Clint during Quentin's legislation days and other times. Quentin and Rita always treated my parents so well. They were very special people to me. Memories and prayers will help you get through this. Hold onto your families too.
Terri Chaloupka { Linford and Betty Mason's daughter}.

Quentin and Rita were almost like a mother and father to me, my wife Kathy and our two children. We bought our first lot at Sun Valley after seeing their card table set up in a corner at the boat show in the Veteran's Auditorium. We built our first house in a finger cover on the very end of Redbird Lane. Spent many weekends there improving that property before building a house. They let us sleep in an office of the old clubhouse building one weekend when it was too late to drive home. We moved from Iowa for 4 years and came back to build another house across the cove on Frontier Road. This time a two story log house. We truly loved the entire Anderson family for their kindness and friendship to complete strangers who became family to them. Our sincere condolences to Clint and Cherri. May God Bless your Mom and Dad, who are together again.

A man who did so much for others worked hard to make Ringgold county what it is today,a humble good man who loved his family his neighbors..I was blessed to know him as my parents purchased a lot and built a home on Sun Valley in 72 ...Quentin and Rita were so welcoming and down to earth I know they are celebrating 2020 in heaven together go rest high on that mountain you work on earth is done go to heaven a shouting for the father and the son!!Prayers to the family at this time you have lost your matriarch but he has left you memories and a legacy that surpasses very few.....

A candle was lit in memory of Quentin Anderson

Friends and Family uploaded 76 to the gallery. 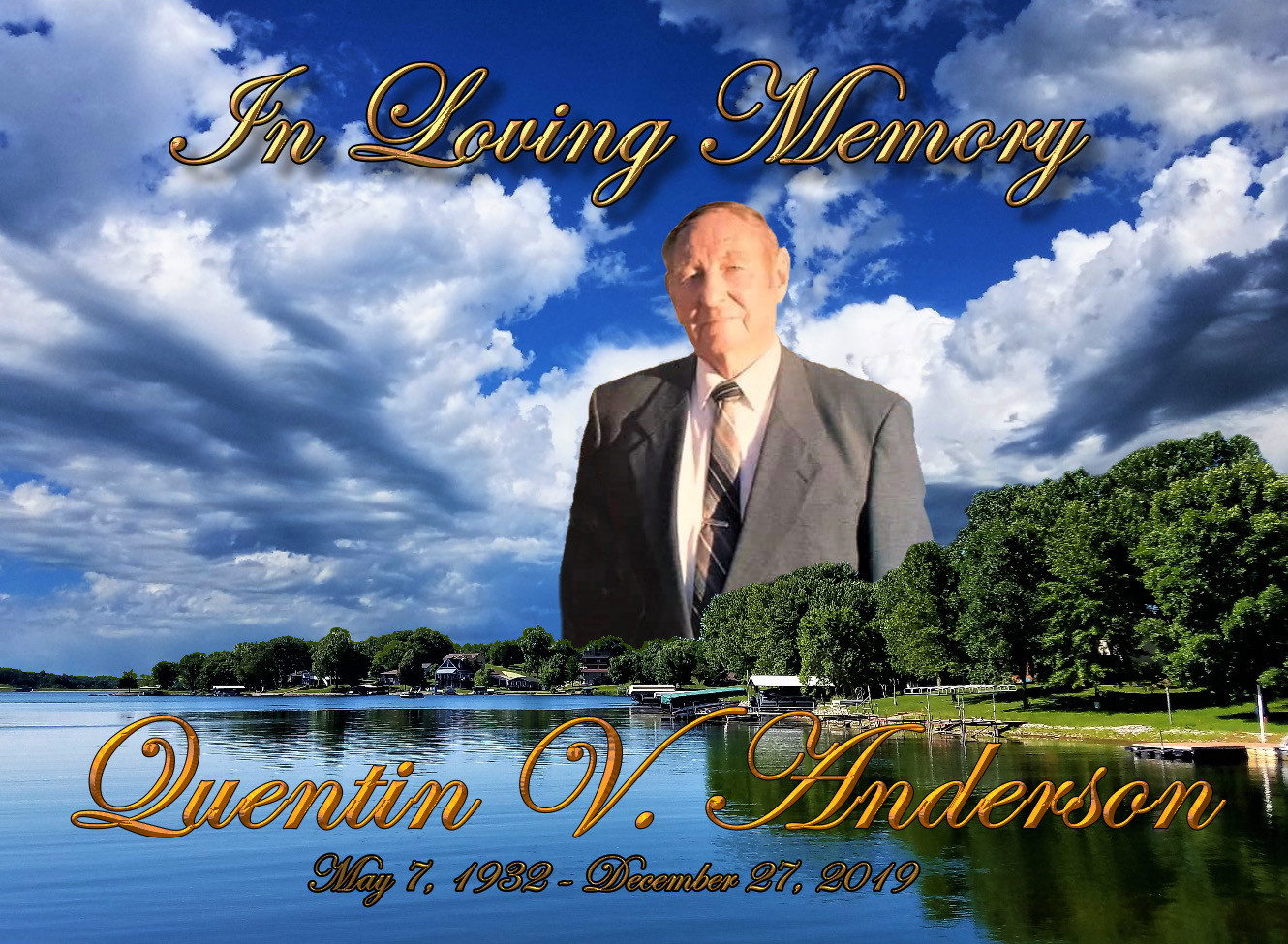