Kenneth Gene Bolinger, son of John R. and Suzie H. (Scott) Bolinger, was born June 4, 1931 at home south of Mount Ayr, Iowa. Kenny grew up in Ringgold and Taylor County.
Kenny was united in marriage to Marcia Haynes in March 1950. To this marriage was born 2 sons Mike in 1952 and Curtis in 1955. Kenny worked for Farmers Coop in Creston and retired as the manager. Kenny learned to play the Mandolin by ear and loved music. He played for Square Dances, Music Jams, and everything between. Kenny also enjoyed hunting, fishing, and working in his garden. He is a member of the Eagles Lodge in Creston and the Clearfield Christian Church. Kenny experienced the loss of his son, Mike, on May 14, 1969 and his wife, Marcia, on May 1, 1994. Kenny married Sherry Boyer Mullin in 1995. They made their home in Clearfield since 1997. Kenny will be remembered as a loving husband, dad, grandpa, and friend.
Kenny passed away March 9, 2013 in Clearfield, Iowa. He was preceded in death by his parents; wife; son; siblings Rex (Austie) Bolinger, Opal (Claude) Rinehart, Everett (Leona) Bolinger, Virgil Bolinger, Paul (Irma) Bolinger, Clarence Bolinger, Lloyd (Violet) Bolinger, Weldon (Rose) Bolinger; parents-in-law Randal and Ethel Haynes of Lenox; mother-in-law Betty Boyer; and step-son-in-law Phillip Kirby.
Those left to cherish his memory include his wife Sherry Bolinger of Clearfield; son Curtis Bolinger of Creston; grandsons Rowdy and Alex Bolinger of Creston; step-daughters Kathryn Kirby of Centerville, IA and Karole (Barry) Weeks of Ryan, IA; step-grandchildren Nickolas Kirby, Trevor Weeks, Cooper Weeks, Katelynn Kirby, and Gracie Weeks; brother Loren (Dorothy) Bolinger of Blockton, IA; father-in-law Marvin Boyer of Clearfield; brother-in-law Doug (Deb) Boyer of Clearfield; nieces, nephews, cousins, other relatives and friends.
A memorial fund has been established in his name to be decided later.
Services for Kenny will begin at 11:00 a.m. Wednesday at the Clearfield Christian Church. A light lunch and time of visitation will follow the service (begin 11:45 a.m.) and continue until 1:30 p.m. Wednesday at the church. After 1:30 p.m. Wednesday, there will be a private burial in Graceland Cemetery at Creston, Iowa.

To plant memorial trees or send flowers to the family in memory of Kenneth Bolinger, please visit our flower store.

Kenny always had a smile on his face Spent time with Kenny at Uncle Everett''s farm in Conway. My thoughts and prayers are with your family during this time.

We were so sorry to hear of Kenny''s passing. He was such a nice man and we enjoyed our time at the Clearfield Christian Church together. Our sympathies to you, Sherry and family.

I will miss Kenny along with everyone. Like many, my memories have a lot to do with music, I remember sitting at his place when I was first learning to play guitar. Kenny asked me to play something and my excuse to not play was not having a pick, he took care of that right away. I ended up playing something but I have no idea what it was. He asked me to come up to the Creston depot one Wednesday to jam with several people he knew, this was at the meal site, old country songs that I did not know. Kenny was always impressed because I could play bar chords, something he had a hard time doing. We had a great time. Between the banjo, guitar and mandolin I am thinking that heaven will have one heck of a jam session this week.

It is sad to hear of Kenny''s death. People in the area will miss his
music involvement at all the jam sessions. He is special. You will
have so many fond memories.

You are in my thoughts and prayers.

Uncle Kenny always had a big squeeze for us! Will miss that!

I enjoyed taking care of Kenny...he gave it a good fight for a long time...you are in my thoughts and prayers... 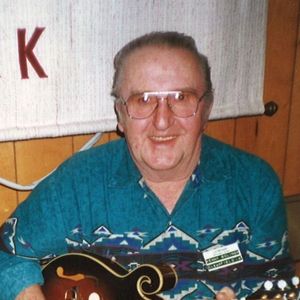