Doris Elfreda (Jarvis) South was born July 1, 1914 in Carnigee, Oklahoma. While still a baby, her family moved to the Maloy, Iowa area where she grew up along with her six brothers and sisters. She was the daughter of James & Mary Belle (Fertig) Jarvis. Older brothers were James Eldon Jarvis, Phillip Howard Jarvis; sisters were Fern Authula (Jarvis) Quick, Florence Irene (Jarvis) Richmond German, Irma Verleen (Jarvis) Dodenhoeft, and Sheila Nerine (Jarvis) Hagestrom. Doris passed away at 3:19 p.m. on January 1, 2016 at the Mount Ayr Health Care Center in Mount Ayr, Iowa at the age of 101 years young.

After graduating from Maloy High School in 1932, she went with the love of her life, Burnell Oliver South, to Atchison, Kansas and was united in marriage on December 12, 1933. Burnell and Doris moved to the Maloy, Iowa area and started farming and raising a family. Two sons were born, Robert "Bob" Burnell on October 6, 1934 and Larry Dee on February 25, 1937. The family then moved to Sioux City, Iowa in 1940 for two years before moving back to Maloy in 1942. There they were joined by twins Jerry Lee and Jackie Dean on June 28, 1942. They continued to do what they enjoyed and that was farming until 1949. They packed up their family and moved to Loveland, Colorado and bought a farm and started raising turkeys. Getting home sick for Iowa again, they returned to Iowa in 1951 and farmed in Nevada until buying a farm near Ames, Iowa in 1955. The year 1976 brought them to Bedford, Iowa. There they bought a farm and stayed there until they retired and started wintering in Texas in 1978. Sterling, Colorado was their next venture in 1992, where they made their home. Winters were still too cold so they wintered down south but changed scenery and started going to Yuma, Arizona in 1992 until Burnell passed away in 1999. The summer of 2000, she made her final move to Mount Ayr, Iowa.

Doris graduated from Caster's Beauty School in Saint Joseph, Missouri in June 1933 and became a beauty operator. She was content on just cutting her own families hair, and loved her #1 job of being a full time housewife and mother.

Anyone who knew Doris (Grandma) knew she loved spending time on the farm taking care of her family. Her garden was her pride and joy whether it was picking/hoeing her hand raised produce or admiring her beautiful flowers she had planted and listening to the birds sing on the tree branches.

In her free time, Doris loved to oil paint, quilt, and do ceramics. This resulted in several made pieces that were made with love. She was proud of her accomplishments and received great enjoyment out of giving her special creations to family members.

Doris has been a member of the Seventh Day Adventist Church since 1944, which at that time was baptized in the name of Jesus Christ our Lord. Clear till the end, Doris was never afraid to witness her faith to anyone who came to visit her. It didn't matter if you were family, friend, or even a stranger, she would always tell you she loved you!

Memorials are to the Mount Ayr Health Care Center.

To plant memorial trees or send flowers to the family in memory of Doris South, please visit our flower store.

Is loved you so much Aunt Doris! Your humor, spunk, and intelligence were always were all traits I tried to emulate. You were one of the few people who could disagree with my dad and he respected you for that. I will miss you beyond measure.KcSc5

Although no words can really help to ease the loss of a loved one,
just know that you are very close in our thoughts and prayers and hope that it
helps you through this time of sorrow.

Sadness that comes in saying good-bye for now, to someone we love.
May today''s sorrow give way to the peace and comfort of God''s love.

I miss Doris at Mount Ayr Healthcare! I know that she is in Heaven with our Lord Jesus & her family there! She always asked me how I am & I always enjoyed talking to & helping her! May God comfort you at this time! Prayers for all of you!

when someone you love becomes a memory, that memory becomes a treasure love you Grandma

Never does one feel so utterly helpless as trying speak comfort to ones left behind.
She has given you something so deep and complete. No matter what their age they never live long enough for us. You are in our thoughts and prayers. 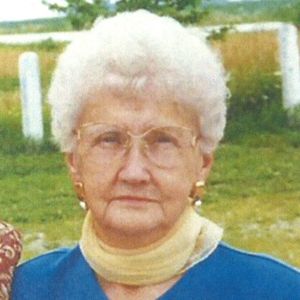