Donella Jean (German) Creveling was born August 29, 1927 to Clyde Leroy German and Florence (Nobles) German in rural Ellston, Iowa. Donella attended school in Ellston and graduated from Ellston High School in 1944. While attending school Donella meet her best friend, Ray "Lee" Creveling, who she later was united in marriage to on August 30, 1944.

Donella and Lee made their home on a farm outside of Ellston and celebrated many joys in their 65 years of marriage. Among those joys were the births of their two sons, Ronald Lee in 1952 and Kevin K. in 1958. Donella was a farm wife and helped Lee through the years in raising their family and with all aspects of the farm. Another joy later in Donella's life was the birth of her grandchildren and great-grandchildren. She always enjoyed cooking and baking over the years to feed the growing grandchildren and great-grandchildren.

Although Ellston was her home, as a past time Donella enjoyed traveling the country and seeing new places and making new friends. She and Lee traveled to many places during their married life and enjoyed wintering in Las Vegas. Donella made her final journey to her eternal resting place when she passed away on June 2, 2016 at the Clearview Nursing Home in Mount Ayr.

To plant memorial trees or send flowers to the family in memory of Donella Creveling, please visit our flower store.

So sorry for your loss.

Ronnie, Kevin, and Family,
We were sad to hear of your Mom''s passing. Donella was a long time friend and one of the last of the German family members from the old home neighborhood on Sand Creek. She was always gracious, kind, and glad to see any of us throughout the years. Knowing her made all of us better. Prayers for all of you as you say Good-Bye to your Mom and Grandmother.

She was a great lady.
It was fun honking the Model A horn when we drove by her front window and watching her waving .
She would always share her sweet corn.
She will be missed by her boys and their families.

many blessings to the family. you have our condolences.

Ronnie,Kevin and families,
So sorry to hear bout your mom passing , she is in heaven with all of our loved ones ....... y''all are in my prayers and also my deepest sympathies

Ronnie, Kevin, and families. Sorry to hear of your mother''s passing. She had a good long life and is now reunited with your Dad. Keeping you all in my thoughts and prayers. Paula (Greimann)Webb

My deepest sympathy to the family of Mrs. Donella. 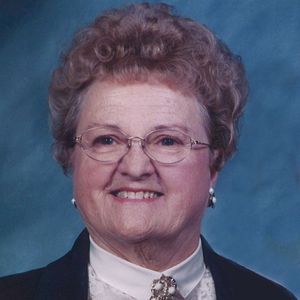