To plant memorial trees or send flowers to the family in memory of Connie Huff, please visit our flower store.

We were very sad to hear of the passing of Aunt Connie. She was a wonderful woman and will be missed. Our love, thoughts and prayers are with the family at this difficult time.
Love,
Bob and Luanne

So sorry to hear about Aunt Connie''s passing. She is in a much better place and is now visiting with Grandma and Grandpa, Aunt Elizabeth, Uncle Don and daddy. Wish I could be there with everyone, but please know you are in my prayers.

I am so very sad to hear of Connie''s death. I became a part of this family, if I may be so bold, between my Junior and Senior year''s of high school. There were not a lot of summer jobs available to kids unless it wad detaselling corn and my parents were not crazy about that idea. I landed a job with Connie and Don caring for their five children ages 3- 9 or 10, while Don and Connie did the farm work.

They had recently survived a fire that had totally destroyed their home and were living in a two bedroom home - without running water - when I arrived on the scene.

I have many memories -from totally ilequiped to be an "interim parent by day" to these five - which the record should show are the closest thing to being a Mother that I have ever encountered.

We had mumps - not me, but close; I shut Kathy''s fingers in the refrigerator door and then tried to relocate her to another part of the kitchen; we had more mac and cheese that summer (and now it is fashionable) - stories I just cannot make up.

Over the years, Connie has shared instances with me where one or the other of the five would say, "Janie would not approve". No greater form of flattery could there be.

I am actually going to be in the area on Monday and hope to connect with you at some point during the day.

Grandma had the most beautiful singing voice. When I was staying on the farm, I would hear Grandma singing along with country songs on the radio as I came inside the house.

Love and deepest sympathy from the Jones Family. You were always great neighbors and friends. Love and will miss you and Don but now you can be together. Prayers to help all your family through this difficult time.

May the road rise to meet you Connie. My life will never be the same without you or Don. 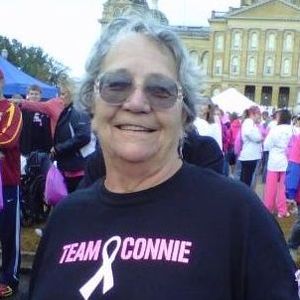