Blanchie Fern Smith Schipper was the 8th child born to Francis Emory and Effie Ollie Belle (Dye) Smith. She was born at 11:00 p.m. on June 20, 1924 in Athelstan, Iowa. She grew up in Athelstan where she attended school there until 10th grade. At that time, she met and married John Clinton Davis. From this marriage two children were born, Emory Eugene and Helen Deloris. The young couple lived on neighboring farms, where he worked the fields and she helped with daily chores and housekeeping until they moved to Clarinda, Iowa.
With the onset of World War II, she was faced with the responsibility of maintaining the family alone while her husband served in the US Army. She went to work as one of the first employees of Paris & Dunn, where she assembled training rifles and was quickly promoted to Supervisor. She remained working there after the war was over, until the company moved its operation to North Carolina, at which time she began working as a waitress. After 11 years of marriage, she was divorced and faced with raising her two young children. As a result of protecting her family, along with being teased by her older brothers and sisters as a child, she developed a feisty nature, which she carried throughout her life. As a young woman, this led to her acquiring the alias "Fireball", but in later years, she was known as "Granny" to all who knew or met her. During this time, she met and later married Don Lamont Schipper. With his job headquarter at Kansas City, the decision was made to relocate the family to Kansas City. From this marriage, one child was born, Deborah Kay. At this point, she was able to devote all of her time to raising her children as well as managing the finances and day to day responsibilities of maintaining the family unit. In addition to this, she frequently found herself caring for various other family members during their illnesses. Hoping to possibly own and operate their own business to help supplement their income once Don was retired, they enjoyed traveling to auctions to purchase antiques to refurbish and sell. They also enjoyed leisurely travel in their 5th wheel camper once the children left home. This enabled them to spend their winters in the warmer southern climate of New Mexico.
In 1990, they returned to Clarinda, Iowa to be closer to her aging siblings and their southern Iowa roots. After Alzheimer's afflicted Don, it was clear to her that her life would be forever changed. Being the loving, caring and devoted wife she was, she cared for Don until her own health prevented her from doing so. After losing "the love of her life", as well as her only son, she relocated to Mount Ayr, Iowa. She enjoyed spending time attending auctions at Stutzman Auction Center, where she also ran the Snack Shack for approximately 2 years. She remained active by attending and dancing at the Silver Buckle Band music shows. Crocheting was another activity she enjoyed so much that she made queen sized afghans for each family member as Christmas presents one year. She continued to enjoy crocheting until her hands prevented her from doing so. Blanchie was a loving, compassionate person whose world was devoted to her family, both immediate and extended. This was demonstrated through her unconditional love for her family. She also drew strength from the strong Christian foundation she formed as a child and maintained throughout her life. She cherished visits and phone calls with her children, grandchildren, and great grandchildren.
Blanchie passed away on October 30, 2014 surrounded by her family. She was preceded in death by her parents; her husband Don; her son Eugene; four sisters and three brothers; and most recently her grandson Harold Eugene Davis.
Left to cherish her memory are her two daughters Deloris (Scott) Stutzman of Mount Ayr, Iowa and Debbie (Terry) Wilson of Kihei, Hawaii; daughter-in-law Jeannie Davis of Villisca, Iowa; one granddaughter Jennifer Stocks of Gladstone, Missouri; four grandsons Gordon (Rayann) Hughes of Creston, IA, Robert Hegarty, II, Ryan Hegarty, and Thomas Hegarty of Kansas City, KS; 8 great grandchildren and 2 great great grandchildren; as well as many many nieces and nephews.
Blanchie will be loved and missed by her family and friends who knew her.
Memorials are for HCI Care Services in Mount Ayr and Alzheimer's Research.

To plant memorial trees or send flowers to the family in memory of Blanchie Schipper, please visit our flower store.

I am so glad I got to know Blanchie, doing family history research. I enjoyed seeing her at the Smith/Dye reunion, as well as our phone conversations. I will always remember her.

Deloris & Debbie-I am so sorry to hear of your Mothers passing, she will be missed by all. My thoughts and prayers will be with you this week. I will miss her calls letting me know about what is going on with her. She was a very special lady. We will see her again.May the Lord be with you and each of your families.

Am sorry to hear of Granny''s passing. She was a very nice lady and smiled a lot at the sales. I know you''ll miss her a lot. Keep your memories which are very precious in your heart always.

Deloris, Jeannie, and Family,
I am so sorry for your loss and not being able to be there today. I have so many momeries of Ma Schipper it would take me a week to share them all. It was a plesure to have been part of the extened family.Ma and Don were more like my parents than friends. May the Good Lord be present with all of you today and tomorrow. I love and miss you all very much.And Ma Schipper may you rest in peace God Bless.
Johnny Jobe 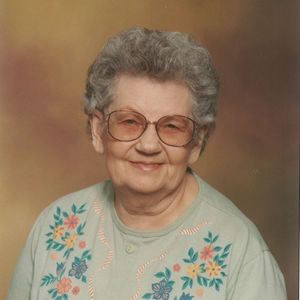