Jan was raised in Story County, Iowa. She attended Nevada School until 5th grade and the transferred to Colo, Iowa school where she graduated in 1963.

In 1964 she moved to Des Moines where she started working at American Republic Insurance Company until 1970.

In 1965 she met her husband Rodger Cannon on her one and only blind date. This really wasn’t her idea, and she was ready to not go if she didn’t like what she saw. She was upstairs and was going to peak out the window as he got out of the car but somehow missed seeing him and had to bravely go down that staircase and “face the music”. It turned out that they got married January 21, 1967.  To this union two children were born, Monica Lyn on October 9, 1969, and Kevin Dale on March 25, 1971. Through the years she worked many part time jobs always putting family first.

In 1983 the family moved to Ringgold County and eventually, at age 40, she started as an agent with Bankers Life and Casualty Insurance. She retired from this at age 65 after building a very nice business and making many friends.

A memorial fund has been established in her name to be decided.

To plant memorial trees or send flowers to the family in memory of Janice Cannon, please visit our flower store.

So shocked to hear of Jan's passing. I'm sure this is hard for your family. You have my deepest sympathy in the loss of your loved one, Jan Cannon. May God comfort you.

Monica & family and Kevin, I will miss your mom, she was a special friend to me, she babysat for me quite a lot, She wanted Tim to be her ring bearer, but I did trust him to do it, so she had Kyle, In their wedding picture I always thought Kyle looked like Roger and Carla looked just like Jani

Monica, Eric, Cade, and Cole, so sorry, have enjoyed Jan as a neighbor.

Janice was a special friend to me since 9th grade in Colo Iowa. I could tell so many funny stories from high school and our apartment days in Des Moines which shared with friend our friend Cookie. The three us were like Lavern and Shirley with one more added. Even after I moved to Colorado we phoned each other and got together when I came back. She always had something funny to say and cared about other people.

Friends and Family uploaded 37 to the gallery. 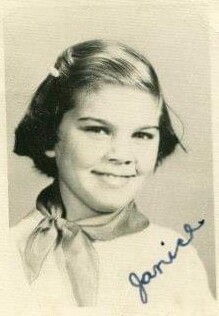